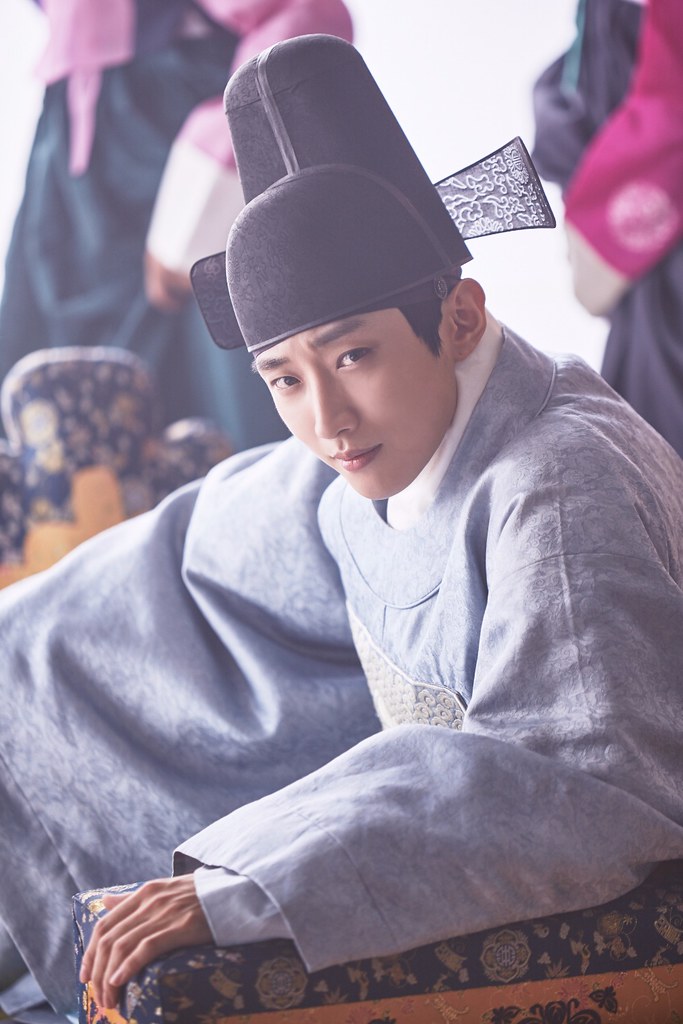 As the second male lead, Jin Young is not only talented in music producing and composing, but just as charismatic and charming as our Seja on-screen. As much as I adore the crown prince’s fashion, I am also quite fond of Kim Yoon Sung’s wardrobe from Moonlight Drawn by Clouds. Yoon Sung does not have nearly as many hanbok as Seja, but the fashion designer/stylist isn’t slacking off when it comes to dressing him up prettily too.

Yoon Sung first appearance is in this black and gold with various flowers and leaves printed on the outer garment. He wears a hat with beaded strings that looks like it is made of citrine or yellow topaz which matches the colour of his inner garment.

The unkempt look of Yoon Sung at the gibang easily gives off sexy vibe as he draws a painting of the gisaeng. However, immediately transform into a sophisticated nobleman that teases Ra On next.

How gorgeous does he look in this sky blue palace attire? Very.

Yoon Sung wore two different hanbok in this episode which I unfortunately could not capture a better shot of the first. He then wears this blue with tint of grey ones when he takes Ra On out of the palace. As I am browse through the pictures for this episode, I notice the show has cut out a scene where Yoon Sung was attacked by gangster in the rain. I am pretty sure it should be in this episode after he leaves Ra On alone to grab an umbrella. There is also inconsistency for Yoon Sung’s beaded strings. At the shop, he still has purple beaded strings, but when it rains, it became red beads. Then he had no more beaded strings when he returns to get Ra On, which I assumed he broke it during the fight.

Moving on to this episode, Yoon Sung wears this light purplish with green inner garment to the Lantern festival. I like the outer garment and the matching purple beaded strings, but I don’t think the green goes very well with the outer garment. What do you think?

This episode’s wardrobe is a bit boring as Yoon Sung wears the same clothes we have seen before.

Sadly, we can only see Yoon Sung in palace attire this episode.

Finally Yoon Sung gets two new clothes in this episode after wearing nothing new for the past two.

I spoke too soon. Yoon Sung only appears in palace attire in both episodes.

Yoon Sung must have been promoted (for saving Seja’s life?) now that his court attire went from blue to maroon red. He changed the most clothes in this episode, and they all look really good on him.

The hanbok on the right made another appearance since E8, and regretfully, it is still difficult to get a full body shot. Hmph.

Finally we get a full body shot of the court attire thanks to Dispatch.

This concludes Yoon Sung’s fashion in the whole drama. It still pains me having to screenshot the last scene, but at least he dies wearing pretty clothes and not court attire. I will miss Yoon Sung, and also miss Jin Young in hanbok and being all manly and badass.