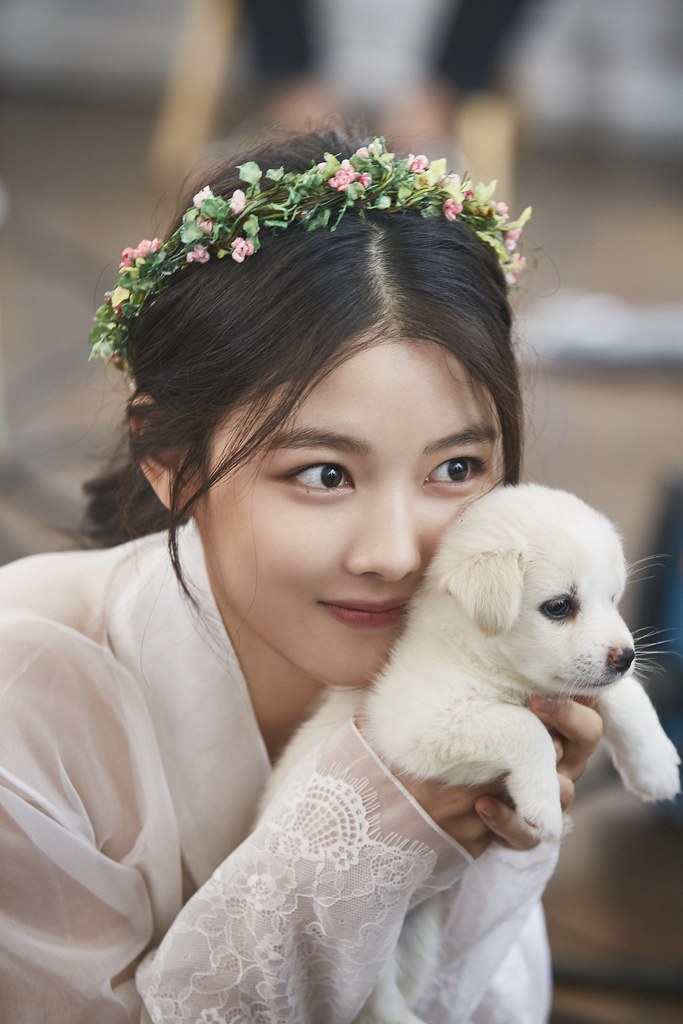 For this post, the focus is on our heroine’s fashion from Moonlight Drawn by Clouds. We will see Kim Yoo Jung exudes grace and elegance when she is wearing lady hanbok, but immediately becomes cute and boyish in male hanbok and eunuch’s attires.

Ra On has changed into the most clothes in the pilot episode, more than our Seja, with six different types of costumes.

Dropping from six to three, the life of a enunuch has proven to be quite limited, fashion-wise, that is.

Ra On was sent to serve Consort Park, so her eunuch dress code changes from turquoise to dark blue. She looks much better in blue, too. Sadly, she only has one attire for the whole of this episode!

So much green! Even though it is all green, Ra On wears different colour tone green this time for her eunuch’s ‘uniform’ now that she is serving Seja. With Yoon Sung’s help, we were able to see her in male hanbok for a change, and then she mesmerises Seja and all of us dressing as a lady dancer at the end.

Back to being a enunch again, this episode Ra On earns a day off on Chuseok, and she dolls up in dark red (male) hanbok.

Good times don’t last, Ra On spent most of this episode in prison and was stripped off all layers except the undergarment. Aw.

Life of a enunch is starting to look really pathetic in the fashion department. Poor Ra On. Seja needs to buy his girlfriend some new clothes. Tsk tsk.

I bet when everyone reaches here, you must be thinking, ‘Ra On needs to go back to being a girl‘! Hahaha. Yes, I agree, her wardrobe is pathetic as we get further down the episode. I gather it is normal, but we want to see her in female attires too, or Yoon Sung and Seja just need to take her out of the palace more often, LOL.

Other than the hanbok we saw in end of E12, Ra On only wears eunuch attire in episode 13.

Now that Ra On is out of the palace, we would think her wardrobe should vamp up. But in comparison to episode 1, her peasant attires are less colourful and plain. She was a cheery and happy girl in episode 1, and this episode she is dealing with heartbreak, so it would make sense she is given duller colour to signify her gloomy mood.

Finally Ra On gets to be a girl again… even though it’s disguising as a court lady.

Here we have it for Ra On’s fashion; which is less fun to compile because her wardrobe is pretty dull in comparison to Yoon Sung’s. It was also difficult to get a full body shot for most of her clothes, too. Her dress in the finale episode is the prettiest especially having a field of beautiful flowers as the backdrop. I just wish KBS would finish their job to the end in regard to releasing promotional stills—so that there is a complete collection of stills from each episode.

Luckily Yoo Jung wears the same hanbok to the signing event, so we get another chance of seeing the hanbok in detail.

3 thoughts on “Moonlight Drawn by Clouds Fashion: Hong Ra On”